I’d always had a fluffy, rose-tinted, radial-blurred image in my head of authors: spending a seven hour working day, in front of their keyboard, writing their stories. All day, everyday. I imagined that somehow, they just knew what to write.

When I wrote my first novel in 2013, I just started writing it. I had some plot points but no idea how they linked up, so I just started writing and let the story emerge. It was fun. It needed a lot of editing and continuity corrections but I was pleasantly surprised by plot twists I hadn’t previously prepared, or back stories that were presented to me; some of which made me stop writing while I processed a new fact, my main character just casually revealed with no prior warning.

When I decided to write during lockdown, I kept thinking to myself: I hope lockdown doesn’t end before I finish my novel. I was worried I’d get so close to the end and then have to go back to work and never finish it. 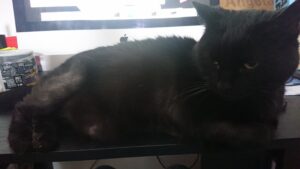 But I did finish. Then I edited it to the point I was prepared to share it with people. And while I wait for readers’ feedback, I’ve been spending a lot of time researching agents. I’ve got a long list of potential agents that represent my genre and a short list of agents I want to approach, for various reasons: they sound nice, or something in their profile reminds me of one of my characters and I hope they’ll feel a connection.

But although lockdown is easing, the world still largely feels like a scary place and I was beginning to miss having my fiction world, losing myself in another place and time where Covid19 didn’t exist.

And then this charming little thought popped into my head, with a start, middle and end. It’s in the same world as the novel I just finished, telling the story of one of the secondary characters. A prequel of sorts though the time lines will probably cross over. A shared universe.

I remember, twenty one years ago, fresh out of uni and working in my first job. I was commuting from High Wycombe to London for the first few weeks, while I found a place to live. On my first day, I stopped in WHSmith to buy a book for the journey home. It was the first time I’d bought a fiction novel as an adult, having read very little but text books for three years and prior to that, teen romances and the assigned A Level English Literature novels.

I wandered to the romance section, feeling suddenly very grown up and a little overwhelmed: I didn’t know any of these authors. The last time I’d bought a book I’d taken my book tokens and made a beeline for anything with a Sweet Dreams logo on the spine. 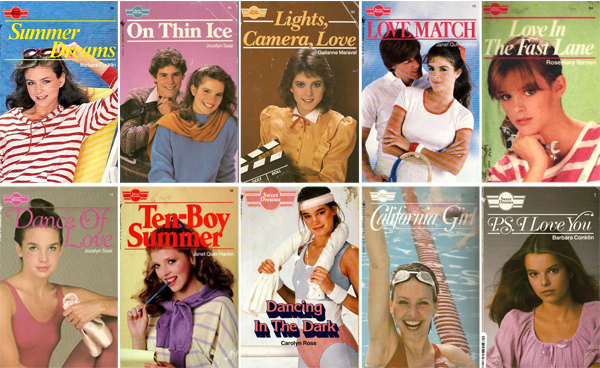 Think I read all of these!

I pulled out a few books and read the blurb and then opened the first page to see if I liked the style. Eventually I chose Sally by Freya North. I didn’t realise it at the time, but that novel changed my life!

A couple of days later I was back in WHSmith buying Chloe by Freya North. And I remember this euphoric feeling when I read the mention of Sally and Richard. I don’t know what it was about this little nod to the previous novel, but that connection, the sense of recognition, made me feel like I was an insider.

Eventually I ran out of Freya North books to buy and while I waited impatiently for her to write more, I found other authors I liked and collected all their novels too. And when I realised the long commute was costing me a small fortune in books, I started borrowing books from work colleagues and discovering more and more writers. Once in a while I’d remember to check, and be thrilled to learn of several new works by my first favourite author. So long had passed that I was able to read Fen, Pip and Cat in quick succession and, unsurprisingly, the McCabe sisters books gave me that same wonderful feeling that I’d got from the Chloe/Sally connection.

I hadn’t given it much thought before, but that idea of a shared universe has stayed with me. More so in TV and movie crossovers. I love spin off shows when they revisit the main show. I love the way in Marvel’s Agents of Shield they make references to events that occurred in the Marvel movies. I recently binge-watched three series of Station 19, although I had a lot of plot lines ruined for me because I was already up to speed with Grey’s Anatomy.

If you’ve ever heard me speak publicly, you’ll know I talk about my ambitions and that as a nine year old, I declared that my ambition was ‘to be an author like Jackie Collins.’ To be clear, I was explaining what an author was, rather than what type of author I wanted to be – my grown-up sister was reading a Jackie Collins novel at the time, and I wasn’t sure if my teacher would have heard of the authors I liked… you know, Enid Blyton, Roald Dahl…!! 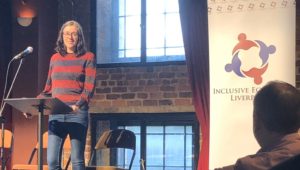 Publicly telling stories about my life.

To this day, I’ve still not read any Jackie Collins but I know she was the queen of the bonkbuster and I think I probably owe that little snippet of knowledge to the prologue of Sally. Also, the fact that my first published novel was most definitely a bonkbuster means I totally nailed that ambition, quite literally!

When I considered writing a novel that centred around an existing, secondary character, I felt that same sense of shared universe excitement. And the basic plot outline just jumped out at me. I wrote the first chapter quickly and the main plots are clear to me, but the paths that link them are still unknown. That vision I had of writers writing all day long..? More often I just sit on my bed staring into space while my mind is whirling with possible scenarios.

It is a timely story however, as it follows my character starting the business that is already up and running in the previous novel. And though I am in the process of closing the business I started ten years ago, I have formed a new venture so I’ll have plenty of inspiration for her journey. 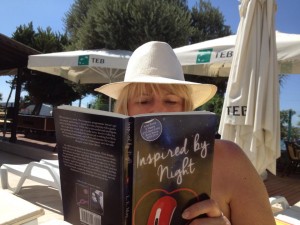 My sister reading my first novel.

When I decided recently, that writing was what I wanted to focus on, I was determined that anything else would be a side hustle. Part-time work to keep a roof over my head while I’m writing. This week was commandeered by my side hustles: I registered a new company, viewed some business premises, wrote a grant application for a CIC and volunteered at a food club. I always said I could be an olympian if procrastination was a sport. But I was determined to save one day this week for writing. 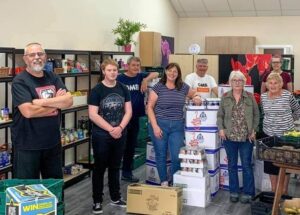 And so on Friday I wrote. A little; between staring into space, making endless brews, and talking to the cat. I drafted chapter two, creating a path between two plot points. And I learned some things about my characters that I hadn’t known before. And on Saturday, chapter three positively leaped out of my fingers onto the keyboard.

I’ve already started writing things that are relevant to the first novel, and the buzz of excitement I get from that is just wonderful. I may be enjoying writing this story even more than the last one.