Adjusting to the New Normal

It was Monday 16th March that I last went to work. I cancelled the two knitting groups I had scheduled for Tuesday in Aigburth and, following the Government’s announcement that non-essential social activities should be cancelled, we made the decision to close the kids tech club for the foreseeable future.

I sat in a mild state of panic. The election was cancelled until 2021, I had no work I could do as all my work for Little Sandbox was part freelance, part voluntary. I had no idea how to fill my time or how I would earn any money if all the activities I was involved with had been cancelled.

Thankfully the Chancellor announced the Self Employed Income Support Scheme, in line with the furlough scheme for employees and I breathed a sigh of relief.

I made a bunch of video tutorials for the kids tech club members, mainly coding video games in Scratch.

I went to the makerspace and borrowed a sewing machine, some thread and some material and I started making face-masks.

When the material ran out I launched a crowd funder to buy more. There was a mass shortage of elastic so while that was on hold, I made scrubs bags. Over the last 3 months I’ve distributed 209 washable fabric face-masks and 47 scrubs bags.

As I adjusted to being at home, I started thinking about my life, my career, and the path I was on. I came to the conclusion that I had taken a wrong turn somewhere along the way and veered off in the wrong direction.

In the speech I gave on International Women’s Day, I talked about my two ambitions. The first was to be author and the second was to run my own business. So on the surface I appear to have achieved both of those things. My first novel was published in 2014 and I started a business in 2010.

I thought about how both of those achievement made me feel, and I realised that I would give up running a business in a heartbeat, if I could be a full time writer.

But making a living as an author is much akin to being a pop star or a Hollywood actor. Neither of those things happen without a lot of hard work. Successful musicians write songs, learn instruments, perform in bands week after week, year after year, honing their craft in the hope of being discovered. And writing is no different.

I was very lucky to be offered a publishing contract for my first novel. It wasn’t my first attempt at writing a novel, but it was the first one that had a proper beginning, middle and end. It was also genre specific which helped, because I sent it to an independent specialist publisher and it fitted their remit. But small independent, genre-specific publishers don’t tend to print mass copies of books and get them in shops across the country. They don’t have marketing budgets, and they don’t offer advances. I sold a small number of books when it was released, mainly to friends and family and I never received a penny in royalties. The book is still available to buy on Amazon as print-on-demand, and as an ebook from several online stores. But it’s a largely unnoticed book, confined to the dustbin of literary history.

The experience put me off slightly. But that sense of euphoria when I finished a book, when I had a few people read it and tell me it was like reading a real book, and that moment when the publisher said they were interested. They were some of my proudest moments. They gave me such a confidence boost to believe that I did have a voice and that I could use it to tell stories.

But finding the motivation and the time to write, was difficult. The business was evolving, growing into something entirely different to that which I’d started. It’s an organisation of which I’m extremely proud and it has changed and evolved in exactly the right way for the business.

But perhaps, not for me. I’ve adapted, I’ve learned all kinds of skills I wasn’t previously interested in so that I could teach others and further develop the business.  I was so busy learning and growing that I forgot to keep nurturing the thing that really mattered to me.

On 17th April, a month after we’d closed all our activities, I found the first chapter of a story I’d started a year earlier while I was on a short holiday. As I read the first chapter the whole story came flooding back to me. It’s one of those charming ideas that arrives fully formed and just needs to be written down.

So I started writing chapter two. And on 17th June, two months later, I finished writing my second novel, a mere six years after the first novel was published. 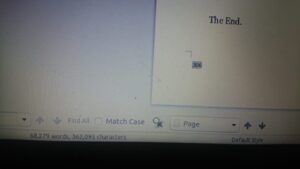 What I’ve learned during the Covid19 lockdown is that, writing stories is still my ambition and I want to get back on that path and dedicate time in the pursuit of that ambition. Of course I still need to earn a living, whether that’s through continuing to freelance, or through employment, but I want to make writing a priority, in terms of my time.

I’ve become comfortable with staying at home, writing – although as my desk is a laptray and my chair is my bed, my back might object to the word comfortable – as we see lockdown starting to ease, I am reluctantly turning my attention to what comes next. As an introvert, being in lockdown has been relatively easy, aside from missing my closest friends and family members, but technology has been a great help in enabling us to still see each other virtually. However, the more comfortable I get staying in, the more I fear I will struggle to go out when the time comes to return to whatever the new normal becomes.

I will apply for jobs, and continue to offer my services on a freelance basis and hope that something perfectly suited to me will come along. I’ve had an odd assortment of jobs over the years, and my skills are many and varied. In some ways that is a hindrance, and I envied those who have a vocation or a trade. But I’ve come to accept that I did have a dream, and my journey has given me many experiences and stories to share. My constant pursuit of new experiences, is actually a strength in terms of my writing. They say, write what you know, and I know quite a lot!

In the short term, however, I’m going to edit my manuscript, format it, and send it to my publisher for first refusal.

If you need any writing of any kind, give me a shout.