If you live in Liverpool, and you have any vague interest in local politics, you’ll know what I mean when I say: since my last post in October, it’s been pretty eventful.

In November, Everyone’s Aigburth opened. We were all a little nervous, as we geared up for opening day. Then several awful things happened: One of our director/volunteers had to take a step back after her husband had a fall and fractured his neck. Thankfully, he made a full recovery (and was back up and out campaigning with me during the local elections), but not before he tested positive for Covid, as he was about to leave hospital, 2 days before opening. As part of his household, 2 of our volunteers had to isolate – but then we realised, having helped get the shop ready at the weekend, 2 more of our volunteers had potentially been exposed.

We waited for Covid tests to come back but knew it would be right down to wire before we found out if any of our volunteers had Covid. After an emergency discussion, we agreed that if there was even a small chance they could have caught Covid, they couldn’t staff the shop on opening day.

Further disaster struck when our stock delivery had been marked down wrong and we only received half the order we’d requested. It was the day before opening and the shelves were half empty and we had no volunteers to staff the shop.

Thankfully, along with local Labour Councillor, Patrick Hurley, my colleagues from Walton Vale Community Shop, Ann & Rachael, stepped in to help out. They put together several trays of stock from their surplus supplies, including lots of leftover fresh fruit and vegetables from their Tuesday shop, and the four of us opened Everyone’s Aigburth on Wednesday 5th November. 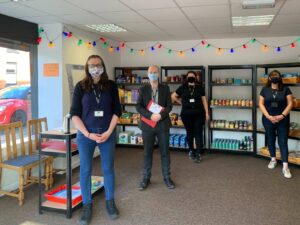 Half an hour before the shop opened, a queue started forming, which I must admit, made me cry! We had 20 members sign up and shop during the 2 hour session.

The following week, we had 42 shoppers and the numbers steadily crept up week after week. We now regularly see around 65 – 70 shoppers each week, and have over 300 registered members. We also started offering a Tuesday night shop, by appointment, for members that can’t visit us during the day time. We’re working on new ideas too, to bring the local community together and continue building on a co-operative approach to the local neighbourhood that has grown out of the pandemic.

Scandal in the City

Just before Christmas, the Mayor of Liverpool, Joe Anderson was arrested. Which was quickly followed by a suspension from the Labour Party and eventually a selection process for a new Mayoral candidate.

I was really proud that my Walton Community Shop colleague, Ann O’Byrne was shortlisted and I buried all the feelings I had about cold calling people to join her phone-banking team. It was surprisingly enjoyable. Ringing up members and telling them about Ann’s policies. There was a lot of positivity in those conversation and the data showed she was miles ahead of the other two candidates.

But then, the day the ballots were due to drop, nothing happened. The 3 candidates were called in again for interview. And then, without any word of warning, with not even a heads up to the candidates, it was announced that the selection process was being reopened. What a kick in the teeth. It was a Walton shop day when that happened. 5 minutes before we opened, an email arrived to all members, telling them the selection was being reopened. We looked at Ann in horror, who knew nothing about it. What a way to be told. She rolled up her sleeves, and got out in the shop front and started helping members do their shop. I don’t know how she did that. She’s an amazing woman.

This whole episode combined, meant for difficult conversations on the doorstep. We had ex-members, appalled by the way the Party had treated its members, and supporters who blamed Labour for the former Mayor. All in all, we heard time and again, “You seem nice, but I can’t vote for Labour this year. I will next year, but not this year.” So at least my colleagues, Patrick and Elizabeth should retain their seats next time, but it meant for a difficult campaign and a defeat on polling day. In fact, Mossley Hill saw the biggest turn out across the city with 51.3% of the electorate registering a vote. People talk about not bothering to vote because there’s no point, Labour always win. Residents came out in their masses in Mossley Hill to ensure a Lib Dem victory.

Still, I wouldn’t have changed anything. I did a lot of good things in the ward and I’m proud of everything the Mossley Hill team achieved:

It was a challenge, and I didn’t shy away from it. The run up to election day was exhausting and emotional, but it was an amazing experience and I’ve made some friends for life within the Aigburth community and Mossley Hill Labour branch.

But the thing that stayed with me the most, is that people aren’t paying much attention to what’s going on; there’s a real lack of understanding about how the council works, how decisions are made, the purpose of councillors & MPs, and of course, why we have a Mayor and a Metro Mayor?

It saddens me that it is common to vote in protest at local elections, despite local government having a more direct impact on our daily lives. At the election count, we were shown the spoiled ballots, and several included messages to Keir Starmer, or called us traitors. The turn out is always significantly higher for general elections, where everyone votes for just one man or woman – the person they want to be Prime Minister – rather than looking at who they’re actually voting for – the person that will represent their voice in parliament.

This whole experience has taught me a lot about politics in this country, and the different mindsets across the parties, and even right down to ward level within parties. The system doesn’t work as it is, whether that’s because of factions, a biased media or a disinterested electorate, but better education to increase engagement would be a good start.

So anyway, I didn’t win, I’m not a councillor, and there are many changes afoot, within Liverpool’s local government after the Max Caller report, so it may be a long time before I can try again. But that gives me some time to focus on my writing.

Just before the short election campaign started, I finished writing my second lockdown novel. And after the election, I finally had chance to read the first draft. And though I say it myself, I thoroughly enjoyed reading it. So the next step is in progress: operation ‘submit the manuscript’.