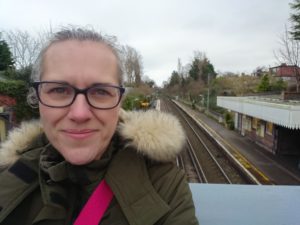 I didn’t need a car when I lived in London, with tubes running every couple of minutes, regular buses, trams and rail, getting around is an easy task. But since I moved back home, the only time I use public transport is when my car is at the garage for its MOT.

Becoming more aware of the climate emergency and the responsibility on all of us to make changes, I’ve been telling myself I must think about giving up the car.

So I’m having a car free day. On today’s agenda, I need to head over to Aigburth for my knit and natter session at 2:30pm but I want to stop by Abakhan in town to pick up some supplies.

Possible routes
I have a couple of options between my house and Aigburth. I can get the 61 which goes straight there, but takes close to an hour. Or I can take buses or trains changing in the city centre.

The bus is operated by stagecoach and I’ve checked there is also a stagecoach bus heading to Aigburth. So I could buy a day rider on the stagecoach app. But my bus home, the 61, is an Arriva bus. Can I use that same pass? Or do I have to use the Arriva app too or just buy a seperate ticket? That’s looking like it’ll get expensive. Besides which, I could decide to get the train to Aigburth station as it’s close to the Coffee Shop.

Whatever happened to the Saveaway? Apprently it still exists but has to be added to a Walrus Card. I found a Walrus card I’d acquired a couple of years ago but I was fairly convinced that I’d have to go to the train station to get the ticket. Why can’t the walrus card be an app or topped up online? Is that a future plan?? It should be. 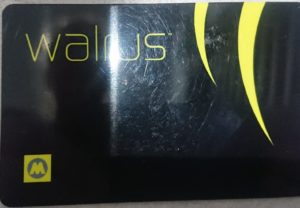 By this point I was already thinking about just taking the car.

I had a look at the MerseyTravel website and found that Walrus Cards can be topped up at Pay Points and happily I found that my nearest corner shop (not technically on a corner but very close) had a pay point. Even better, it was just over the road from the bus stop.

I only waited a minute for the bus, although I had to ask what to do with the card and then scurried up the stairs to hide my embarrassment!

And in the time it took me to write that account, I’m almost at my destination. I jumped off earlier than I needed too and walked, but in my haste left my gloves on the bus.

I bought some wool and some cross stitch kits and then consulted the MerseyTravel app to see which was my fastest route to Coopers.

Apparently the train would be quicker, but I decided to ignore it and take a ride on the much loved 82 bus. Having joined the 82 bus campaign group outside the Town Hall last week it occurred to me that the more people using the bus, the stronger the argument for keeping it.

I cut through Lime St Station and made my way to the bus stops outside St Johns. The 82 was already there. Interestingly, an Arriva bus. During the journey we took turns overtaking each other with a stagecoach 82 bus. So who sets the routes? MerseyTravel? Bus companies?

The things you start thinking about when you start poking your nose into council affairs. Since being selected to stand for council I’ve learned so much and I have a much greater appreciation of all the plates the council is spinning.

And already I’m on Aigburth Road.

Arrived more than an hour and a half early for knit and natter. But that just means I’ve got plenty of time to enjoy lunch and to decide which route to take home later.

Knit and natter was quiet. Just the two of us daft enough to venture out in this weather. I made a start on a shawl and my companion made a start on a knitted square for a blanket. We talked about all kinds of things from technology to disabilities and even discussed the odd yarn craft tip too.

As it’s rush hour, the MerseyTravel app pointed me in the direction of the train station so I made my way to Aigburth Station and found the charming community book exchange in the waiting room. Didn’t know it existed but I have been most concerned by the lack of a library in the ward, so I was relieved to see that there is an option for people to access free books. 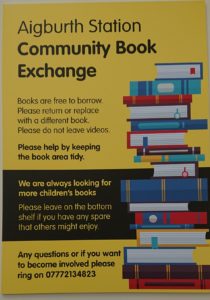 The downside to Aigburth station is the lack of wheelchair access. No ramps or lift to the platform. This is surely something that needs to be addressed if we’re to convince people to use public transport instead of cars. I’m guessing it’s not the only train station with no step free access.

Certainly arrived in town much quicker than if I’d been on the bus. Changed at Central to pick up the Ormskirk train.

By the time I arrived at Aintree, the light was fading, the temperature dropped and the wind was much stronger. It was a fairly horrible walk home. As I passed the cars, all queued up in rush hour traffic, I longed to be warm and cosy in my car. But on the plus side, at least I was moving.

All in all I found it a fairly good experience. The weather definitely put me off, when I stepped out of my front door I immediately contemplated going back in to get my car keys, and I almost certainly would have done if it had been raining.

Usually around 4pm I start getting a bit twitchy about having to drive home in rush hour. Today I had no worries because someone else would be driving. It was definitely less stressful. I also had time to write this blog during all the stages of my journey.

Practically speaking, there are times when public transport would be awkward, especially if I need to carry a lot with me. And perhaps if I had lots more errands to run. My slight detour to Abakhan today was really on the way to my final destination, but if I had to visit places that weren’t so easy to get to that could be a challenge.

But for me personally, I found Aigburth well served by public transport and a fairly enjoyable journey.