Make your own: Brookside board game

In 2017 my other half (OH) and I, started watching Brookside from the beginning. We are currently at the tail end of 1986 – one of Brookie’s finest years, featuring storylines such as: Tracey Corkhill’s affair with her teacher, Sheila’s rape, Gordon Collins coming out as gay and Heather’s husband dying from a drug overdose.

My OH picked up the Downton Abbey Destination board game from a charity shop and we played it several times over Christmas, enjoying the style of play.

Having undertaken some research I discovered that there is a whole range of destination games, including New York and London and that the original game was created by a taxi driver.

So naturally, I decided to make a Brookside one for his birthday.

Obviously I needed more locations than just the 5 houses on Brookside close so I added places that had provided the setting for various storylines over the first 4 years:

I sketched a design on paper before creating it in inkscape. I used the grid settings set at 25mm wide and made each square a potential space. I didn’t want it to be too easy to get around, so I threw some obstacles in the way.

The most important thing was the layout of the 5 houses and the T junction at the end of the close, as well as the distinctive bend in the road.

After that I took artistic license with the location of places on the board.

I printed off a sheet of icon stickers which represent post and RPA cards (see below) I placed these at random locations on the board. I had intended to engrave these but I completely forgot.

I chose cookers for the playing pieces as a nod to Gav and Petra’s arrival on the close.
I designed them using tinkercad and printed them on the 3d printer. 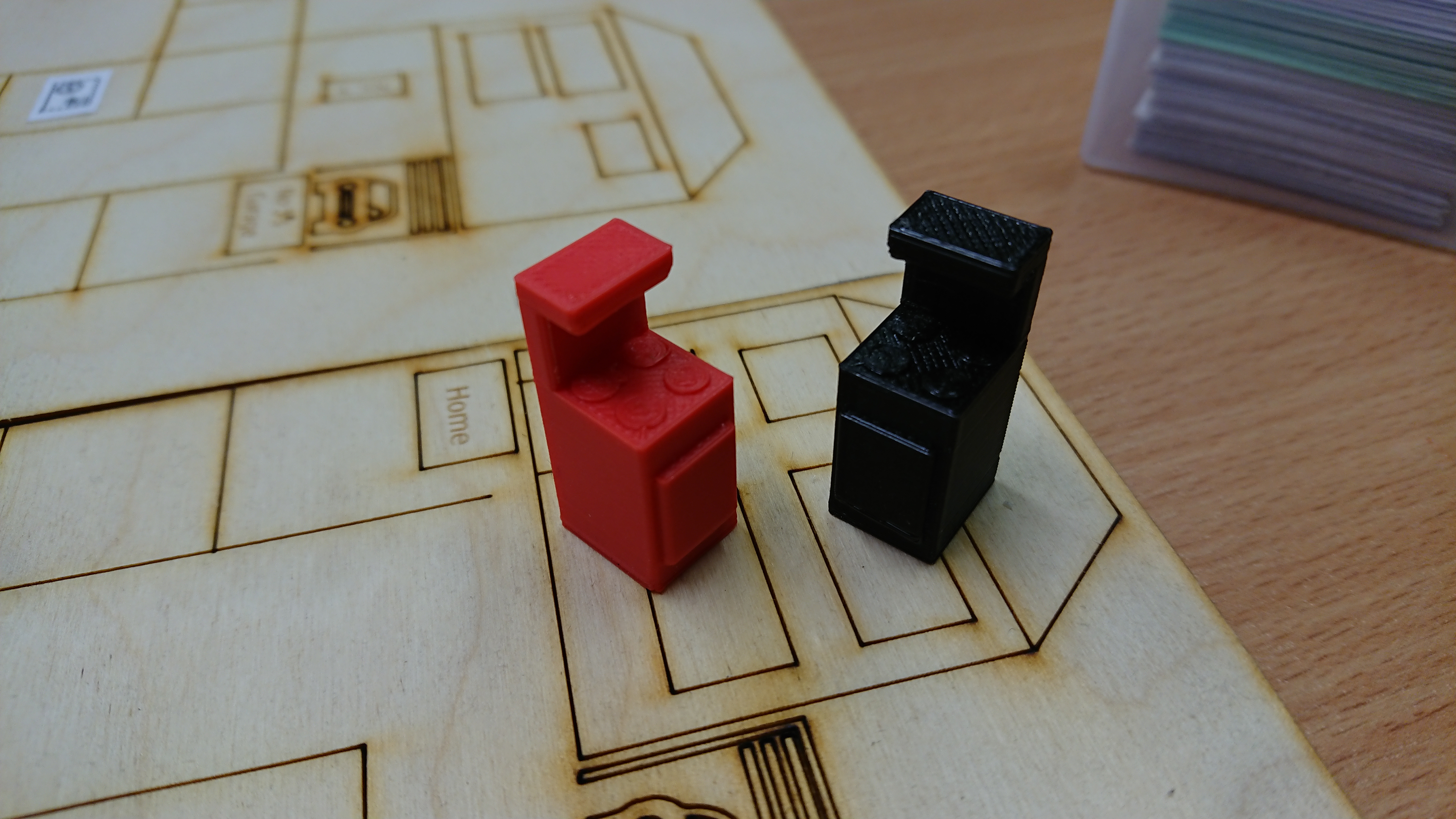 I decided the currency in the game would be bevvies. So I cut a load of beer tokens.

Download the pdf file here. I cut 200 tokens which took about 4 hours in total.

Download the dxf and stl files (board game, beer token and playing pieces) 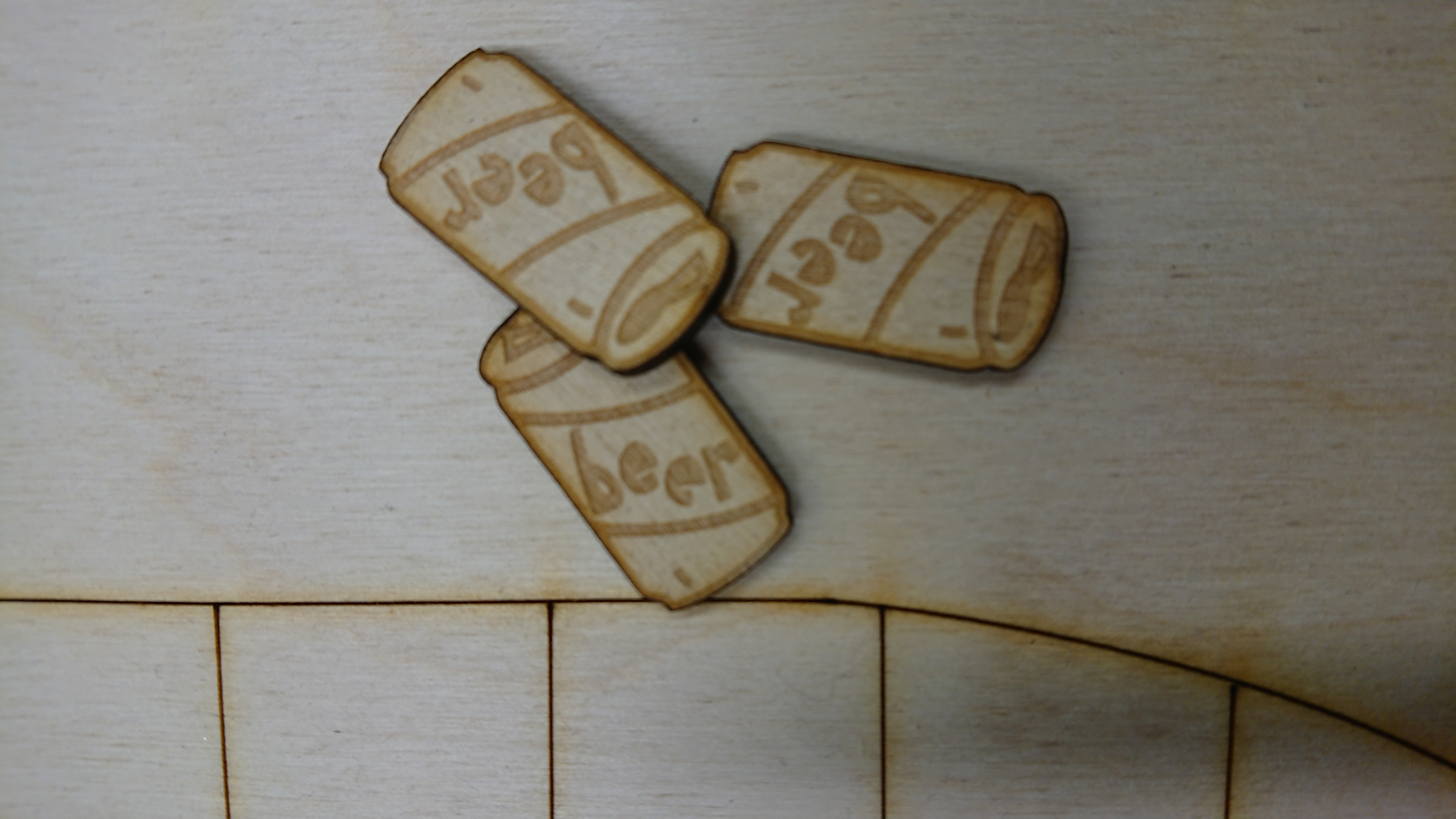 The point of the game is to travel around the board visiting locations and earning tokens for completing a task. Naturally I wanted these tasks to be in some way relevant to Brookside so for example one of the tasks at the courthouse was “Free George Jackson”, one of the tasks at No. 8’s Garage was “Catch Sinbad stealing food from Annabel’s freezer.”

Tasks / Location cards would be worth 1, 2, 3 or 4 bevvies. I wanted to make sure there was a good mix of each number and a spread across the locations. Although, I may have been slightly biased towards No.10 given that so much exciting stuff happened there, it got more 4 bevvy cards than the others. I largely stayed within 1982 – 1986 but where I knew about future events I did make reference to them occasionally, for instance, “Help lay new flagtones” at number 10 – as a small nod to the later body under the patio storyline. 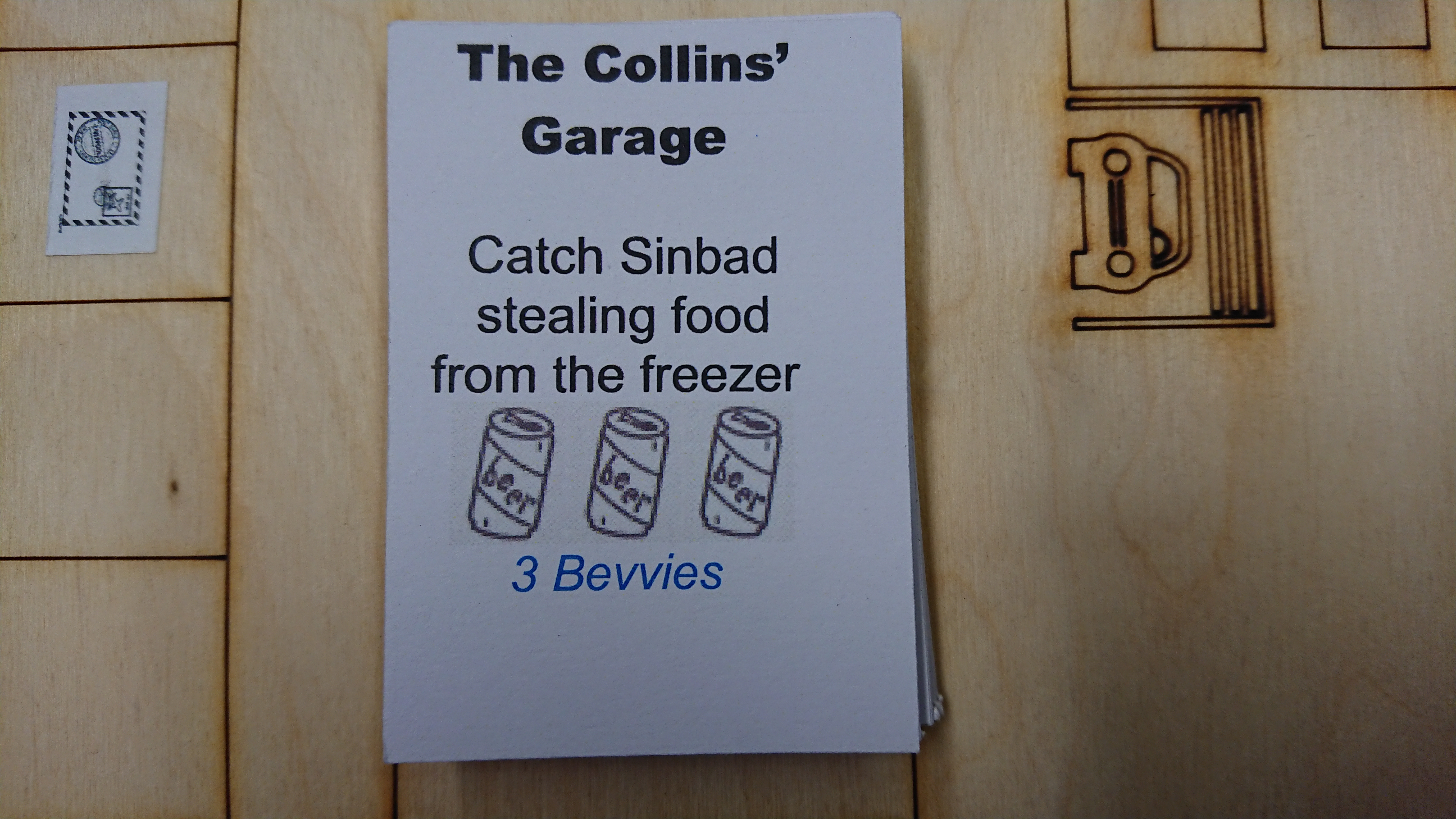 In addition to the location cards I wanted chance cards. If you imagine the community chest and chance cards in Monopoly, the Downton Abbey equivalents were “Carson Cards” and “Post Cards”. I maintained the Post cards but named the other cards Rate Payers Association Cards (in fact, one of the Number 8 location tasks is to join the rate payers association – worth 1 bevvy!).

I created a spreadsheet with 6 tabs for each of the cards – with locations divided by reward value.

I then created a mail merge with 16 cards per sheet, taking the data from each tab. I also added in a image file on each sheet, whether that was 1, 2, 3 or 4 bevvies.

I printed the RPA cards on green card, the locations and post on white.

I created back designs for each too – the location cards displaying the Brookside Close street sign, the Rate Payers Association cards using an adapted Brookside logo and the postcards using a Liverpool post image. 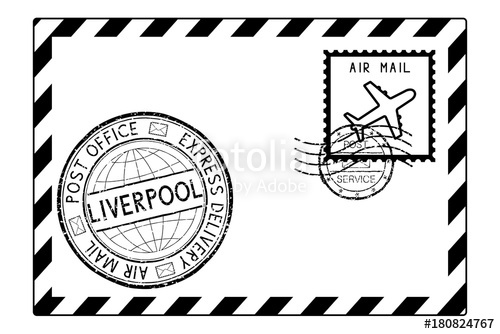 My final task was to make a box. I ordered a couple of sheets of A1 card and used the following dimensions:
base rectangle width 41cm x 31cm

I made the sides 5cm high – so i doubled this up so the sides could be folded over to make them sturdier. I also added wings to the longer edges which could be stuck down under the flap of the short edges to maintain the structure.
For the lid I made the box larger by 2mm.

(Sorry – I forgot to photograph this process and I did it all by hand with a pencil and ruler so I have no design files to link to).

Finally I created a collage of Brookside images annd placed the logo on top. I stuck 2 A4 sticker sheets together and fed it through the A3 printer and then placed these on the lid.

And there you have it. A Brookside board game.

We have played this so many times already and we love it. 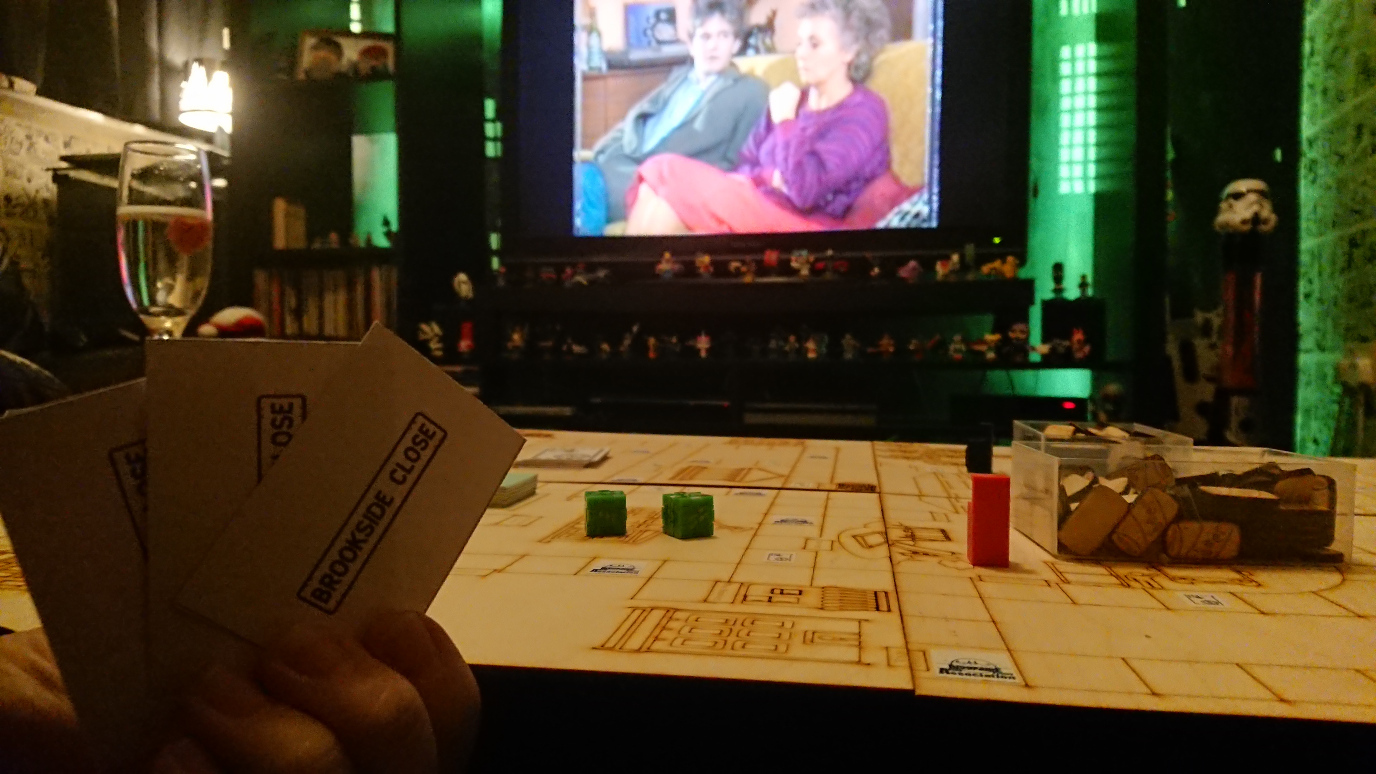