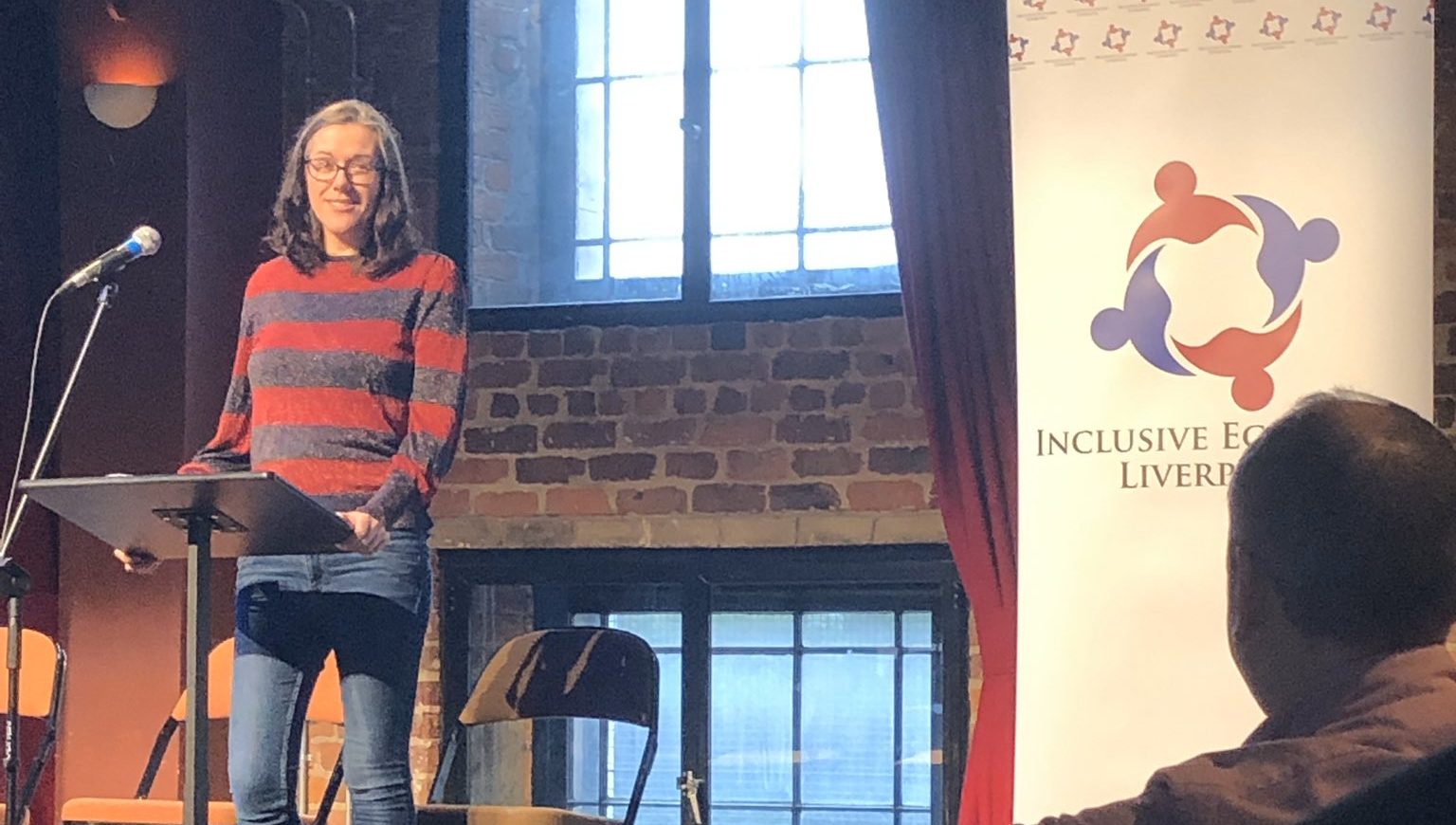 Today I’m here to tell you about how we developed a person centred approach to digital inclusion, by exploring how digital tools complement traditional crafts.

I believe we’ve reached a point where, the only people left who can’t use computers are those people who don’t want to. And no amount of basic IT courses are going to reach them.

This year the Centre for Ageing Better and The Good Things Foundation produced a report that estimates 91% of those who lack basic digital skills are over 55. They concluded that the same old approach won’t work.

Finally! Someone who is speaking our language!

We have been advocating for something different for a few years, because we believed that there was merit in using a more creative approach to get people interested in digital skills.

I suppose it comes down to a question of what we mean by digital. When people talk to us about the problem of digital inclusion they talk about “access to the internet” “Using social media” “Mobile phones”. Which all sounds a bit dry and boring.

When we talk about digital inclusion we think Digital photography, 3D printing and Making things with lasers. Which sounds loads more exciting.

2 years ago we took part in some consultation sessions to help shape the LCR digital inclusion strategy. We sat around a table with housing associations, councillors, the DWP, age concern and other national charities. We were asked: What’s the problem.

After much discussion, I can sum the problem as one simple issue: older people can’t use online forms.

That’s it. That’s the problem.

But it excludes people, particularity older people and it forces them to learn skills they don’t want in order to access services they’re entitled to.

I mean, when you think about it like that, it’s just morally wrong, isn’t it?

So how important is it, really, that older people learn basic IT skills? Whenever I ask that question of people they generally say that using facebook would give them a connection to the outside world and help them feel less lonely.

Which is all well and good, but given what we know about social media, and how it is so easily manipulated, would you want to subject your parents or grandparents to it?

But let’s be realistic, the world is changing, technology is advancing at an almost alarming rate. Like it or not, having digital skills is going to be useful, if not necessary, to everyone.

But if decision makers are committed to reaching a point where everyone has some basic digital skills, then they have to get on board with the idea that one size does not fit all.

Little Sandbox a small social enterprise based in North Liverpool and we don’t have much clout. Yet. We made lots of suggestions around digital inclusion, we talked about digital art, making, we suggested they involve makerspaces in their plans. And I believe LCR has invested in opening a makerspace in Prescot. Which is great news. But it would also be great if we could see some investment in the makerspaces we have in Liverpool, because in the current economy, we are all at risk and we could all be doing so much more in our communities with a bit of support.

We realised, no one was going to take our suggestions seriously, until we could prove they worked. We’d been here before, when we were trying to open our kids tech club, we just needed one funder to take a chance on us.

Eventually about 12 months ago, we successfully applied for some “Make:Shift:Do” funding from the Craft Council which was for pilot projects that introduced traditional crafters to digital tools. We saw this as an opportunity to put our idea into practice.

We spoke to the library manager at Norris Green Library and asked her, which craft books were most popular among visitors. She told us it was knitting and crochet.

Okay, you might think it’s a bit of a stretch to use knitting and crochet to teach people how to use a computer.

But that’s exactly what we did!

We started a knitting group. And we advertised it as an opportunity to enjoy knitting and crochet and have a go at some of our digital tools.

The first week 2 sisters came in and said “We’re not interested in your digital tools, that’s not for us, we just want to knit and have a natter.” Ok, no problem.

Week by week the group grew to about 15 regular members. We realised that, more than anything else, this was an opportunity for them to socialise, they quickly bonded, some of the group came because they wanted to learn different techniques, some came because they were lonely, some came because they needed something to help them get through the pain of losing their husband. The group has provided much needed support to older women at risk of social isolation and depression, and given them a sense of belonging and purpose.

But it’s also given them a sense of confidence around digital skills and increased their ability to engage with the ever expanding digital world.

After a few weeks one of the group brought in a cardigan she’d knitted. Chris suggested she could make her own buttons and so he showed her a basic template and how to cut them on the laser cutter.

The following week all of the group made their own buttons.

One of the group wanted to make a pom pom for a hat she’d knitted and needed something to wrap wool around. Chris showed her how to create the shape on the computer and then cut it using the laser cutter.

One of the group said she wanted to make something for her granddaughter but she’s too old for knitted stuff, she’s just interested in unicorns. So we suggested she make a tshirt with a unicorn on it, and introduced her to the vinyl cutter and heat press.

The following week they were cutting slogans on the vinyl cutter and heat pressing them on to their knitting bags.

Another week, we showed them how to print onto fabric using the sublimation printer. And then we got them to sew in some LEDs using conductive thread.

Each week, we find out what they want, what matters to them, and we show them a digital solution.

The group has been going for nearly a year now, we ran out of funding about 6 months ago but we haven’t got the heart to tell them to stop coming. They wouldn’t listen to us anyway. The 2 sisters who came to that first session, they now teach newcomers how to use the vinyl cutter to make their own t-shirts and have recently learned how to format images for laser engraving. They’re working up towards 3D design so they can 3D print their own buttons.

One of the group has joined our maker business programme – she knits and crochets so much stuff she wants to start selling it online – and she wants to manage that herself.

I noticed recently that pretty much all of the group – which ranges in age from late 50s through to early 90s, all now have mobile phones… and know how to use them! If that’s not evidence of success, I don’t know what is.

The lovely thing about this approach to digital inclusion, is that they don’t even realise they’re learning to use a computer. What we’ve shown them is how to use digital tools to enhance their hobbies. But in doing so, they’ve learned how to use a mouse, a keyboard, how to search for things online and how to navigate the menu systems on different applications, And I wouldn’t be surprised if they could all complete an online form now aswell.