The hierarchy of football supporters

I wrote this post about Steven Gerrard’s final game at Anfield before his transfer to LA Galaxy, ending a 17 year career at Liverpool Football Club.

It was the first real post I’d written about football, offering an opinion inspired by the outpouring of emotional disappointment, so I was over the moon when lfconline.com reposted it on their website.

I tend to shy away from talking about football in general because I don’t feel I have the right to an opinion, due to my low position in the unspoken hierarchy of football supporters.

I haven’t heard it formally acknowledged, but I have heard several arguments concluded with a dismissive ‘What would you know? You don’t even go the game‘ or ‘when was the last time you set foot in Anfield’, which suggests the value of an opinion is proportional to their level of support. So here’s what I perceive to be the hierarchy of football supporters.

At the very bottom of the support ladder there’s the people that have a vague awareness of football, they claim to support a team because they’re born into a family of supporters, they might even be the contrary type that supports the rival team in an act of defiance because they’re simply not that interested at all but make a token gesture of cheering if their adopted team wins, or more likely, their rival team loses.

Next up there’s the armchair supporters, those that watch their team when they’re on TV and will pay attention to the score. These guys have varying levels of interest, some will watch every televised game, while others will also watch all the non-televised games by any means necessary.

When was the last time you went to the match?

In the middle of the hierarchy is the casual attendee. These are the ones that watch every match on TV, unless they can get hold of a ticket, in which case they’ll jump at the chance to go to a game. They’ve probably been on a waiting list for a season ticket for years, and gladly make use of tickets for the league cup qualifers and mid-week evening games that no one else wants to go to, but for which they need to buy tickets to guarantee their right to buy a ticket should their team make it to the final.

Then there’s the season ticket holders, and the supporters that somehow manage to get a ticket to every home game. They’ve likely been going the game since they were a kid and have more than earned their opinion, watching the players week in week out without listening to the nonsense spouted by the match commentators.

A step up from the season ticket holders are those that, in addition to going to every league home game, also go to every cup qualifier and all knock out matches played at home.

There’s a sub category here: Those supporters around the world, unable to go to the match due to their geographical location. In New York, for example, the NY Reds (New York’s LFC Supporters Club) are up at the crack of dawn to make their way to the 11th Street bar for a 7:30am kick off (12:30pm UK time). The place is full, the supporters don’t stop singing and the atmosphere is amazing. These supporters are as passionate about their team as any at the top end of the hierarchy, and shouldn’t be dismissed simply because their location prevents them ever stepping foot inside the Stadium.

It should be noted here that there’s also a snobbery about whether you support your local team or whether you’re a glory hunter following the team that tends to win more often. But should you support your local team, or the team your family support? With so many people relocating, not just within their own country but to other countries around the world, it’s little wonder that we find kids, growing up in London or New York, being raised to support Liverpool, Man Utd or even Hull City.

Where were you when we were playing Trabzonspor on a Thursday night? 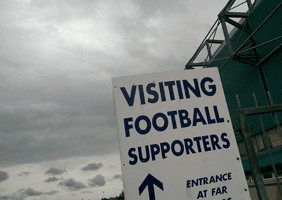 Finally there’s the top of the league supporters that not only go to every domestic home and away game but they travel to away games in other countries.

So whose opinion counts?

Well, as a lowly armchair supporter that has enjoyed a few seasons as a casual attendee, I have never really felt that my opinion mattered. But that might make me slightly more rational and less emotional in my opinion. I’ve witnessed debates between season ticket holders with opposing views. Both opinion is as valid as the other in the hierarchy of support; neither party can claim the other doesn’t know what they’re talking about as they both have the same level of commitment to their team. But their opinions differ non the less.

So when it comes to opinion maybe it doesn’t matter how many games you go to or how far you travel. But maybe those factors effect the passion and emotional stance of a supporter. Maybe going to every game – home and away – gives you a stronger bond to the club, makes you part of the “twelfth man” and gives you an insight that those less passionately connected to the club might have.

Either way, as they say, everyone is entitled to an opinion, and with an open invitation to write more articles for lfconline.com, I’m no longer afraid to share mine.